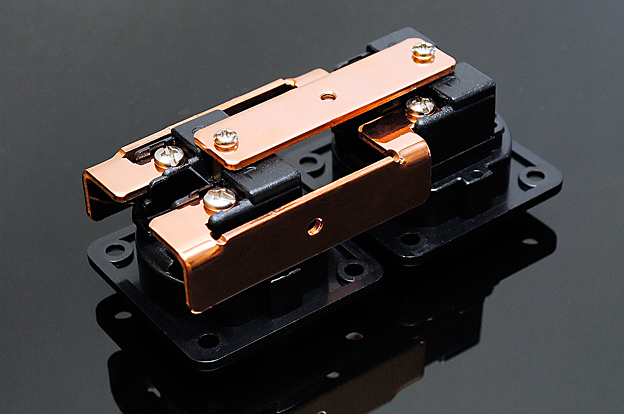 Most GigaWatt devices feature a novel internal current distribution system directly to the output sockets. It is based on massive distribution bars, made from thick, polished slabs of copper, with a cross-section of 30mm2 each. Using separate bars allows for an even and stable power distribution, regardless of the draw on each output. All types of the bars are a proprietary GigaWatt design and were developed and manufactured by GigaWatt.

The manufacture of such bars is very expensive due to the quality and purity of the copper they are made from, as well as the technology applied. The distribution bars are made from the cleanest (99.99%) cathode copper Cu-OF (oxygen free copper with high conductance) and Cu-ETP (metallurgical refined copper with high conductance). The copper is enameled and annealed, what makes it denser and increases conductance, plasticity and resistance to corrosion in most environments. It is characterized with high conductance, low contamination and low residual oxygen content. Mechanical processing uses a technology that does not produce any heat, which could oxidize the copper and negatively influence the conduction parameters.

In the flag conditioner GigaWatt PC-4, and in products of the limited “Special Edition” series, the distribution bars are silver plated.

The top conditioner model, GigaWatt PC-4 is equipped in a special, technologically advanced hydraulic-magnetic switch from the company Carling. This costly unit is manufactured in USA on special order and to specifications from GigaWatt. 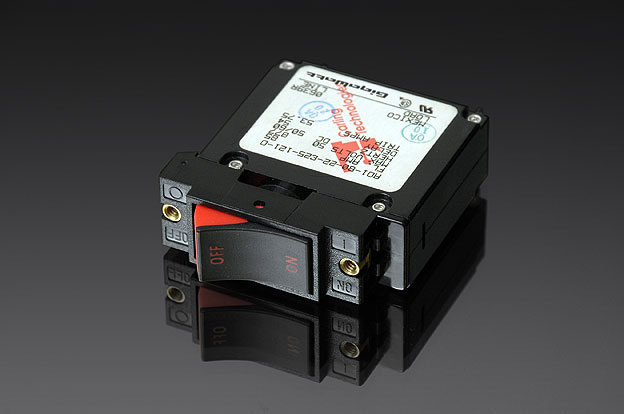 This component has the role of the main power switch and a current flow control element in the conditioner. It opens the circuit only in the moment of surpassing the safe amount of current flowing through the conditioner. The switch, used in the PC-4, is free from the flaws typical to fuses and thermal protections, being the consequence of their simple construction. Those commonly used elements have, besides low price and obvious protective capabilities, have one weak point, which disqualifies them from usage in audio systems – they limit power supplied to the protected circuit. This flaw is a consequence of the small cross-section of those elements, what can be avoided using the hydraulic-magnetic switch used in the PC-4.

This component guarantees switching and supplying full declared power to the supplied devices. In addition it can deliver high constant current (25A), with peak values much higher (70A), what allows to supply power hungry devices like power amplifiers.

The used switch comes from the most advanced product line of the Carling company, while some accessory manufacturers use similar switches from a low-budget, economy series, or simple “house grade” over current switches, with a random parameters tolerance and unreliable function. 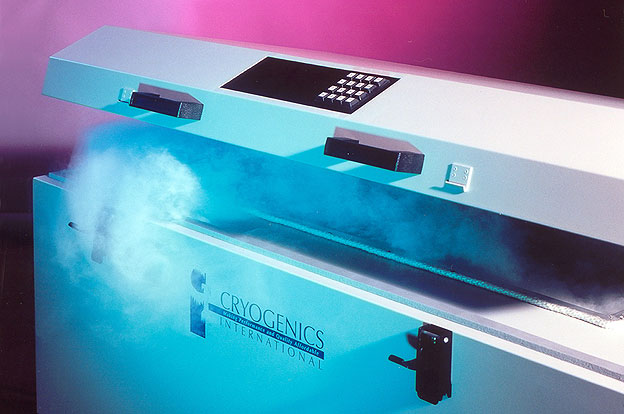 The quick technological advance caused manufacturers in many industry branches to discover something curious. Their products improved by controlled cooling, and then warming, in a cryogenic machine, utilizing fluid nitrogen. The manufacturers of work tools were among the first, who praised the success of the new technology, when the drills became sharper, and metal shafts stronger.

In time the cryogenic technology came to other areas of life. So it should not be a surprise, that it is applied in audio, with success. The audiophile and music lovers’ society claim, that the CRYO effect is audible on Compact Discs, which were subdued to that process. The bass lines become clearer, more condensed, deeper, and most surprising, louder. Piano tuners and piano string manufacturers also noticed, that instruments with strings, which were treated, keep their tuning longer. It is not different with all contact points in audio products.

Simplifying, the cryogenic process is about a fully controlled cooling of the material to -315°F, which takes about 8 hours until the temperature stabilizes, and the material becomes “temperature saturated”. Then, during the coming 24 hours, the stabilization of the treated material occurs. Then the process is reversed, and during 10 hours the temperature returns to normal. So the complete treatment of a material can last for about 50 hours. The goal is to reset and condense the molecular structure of the metal. Holes in the internal structure of the material cause electrons to move in a non-organized way, what makes the flow slower and influences the quality of transmission in a negative way. This may cause distortion, noise, and in consequence, degrade the sound and vision. At very low temperatures (below -315° F) the movement of molecules slows down, and the metal particles condense into a unified structure. And the very slow de-freezing of the metal allows the particles to disperse in a homogenous way. The result of this process is equally spread molecular structure, homogenous and visibly stronger.

This process creates persistent changes and advantages that do not decay in time or with return to working temperature. Elements modified in this procedure are characterized with much better conductive properties, what translates directly to sound and picture. An audio-video system exhibits more clarity, with more precise and dynamic sound, and more vivid colors.

The production of electronic equipment often requires the usage of substances harmful for the environment (what means also to ourselves!). Already some time ago, (actually on January 27th, 2003) the European Union issued the RoHS Directive (Restriction of use of certain Hazardous Substances), which was designed to eliminate (or restrict) the usage of harmful substances in the production of electronic devices. It is in force in all EU countries since July 1st, 2006. On the list of harmful substances the following were placed: mercury, cadmium, lead, chromium and flame prevention substances PBB, PBDE.

The RoHS directive is a derivative from another directive – WEEE (Waste from Electrical and Electronic Equipment) and is closely related to it. This relationship is not by coincidence. Countries manufacturing, or importing, electronic equipment, realized, that the electronic, electrotechnical and precision industry branch, is one of the sources for emission of dangerous substances into the environment, having its effect also on people. This is the reason, that the RoHS directive is a kind of “first level protection”, which should minimize the amount of dangerous electronic waste.

All electronic components, used by the company GigaWatt are manufactured according to the lead-free technology, conform to the RoHS requirements.

JUMP to the GigaWatt Product Page